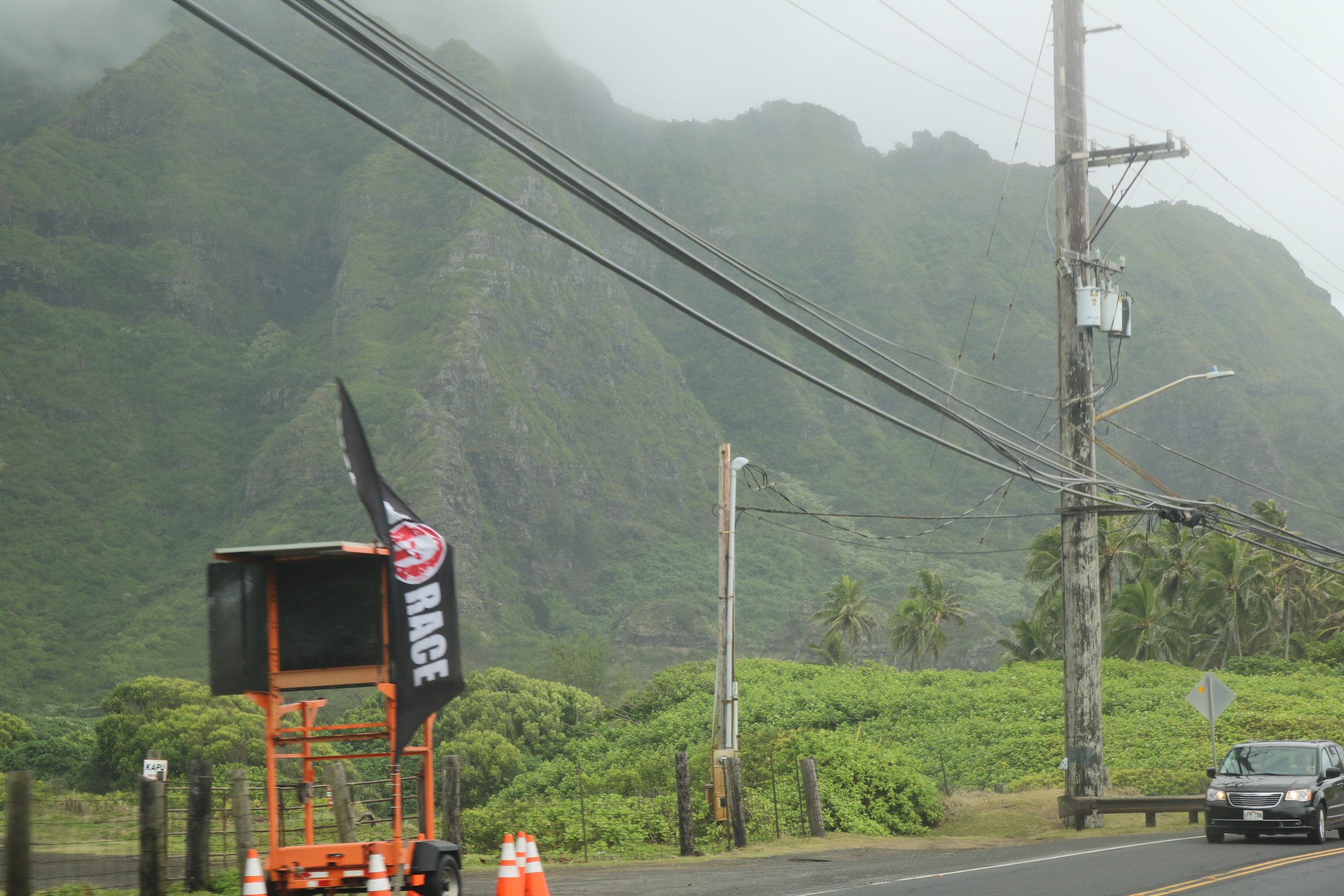 By now, you’ve heard that the Hawaii Spartan Trifecta weekend for 2018 was canceled.  You also might have heard some people were upset, some canceled their trips, others’ trips got canceled for them, and some went and made the best of it.  On the flight home, I felt compelled to write my thoughts about it, what happened from my perspective, and what it was like to be in a legit hurricane warning.

We arrived in Hawaii the Tuesday before the Hawaii Spartan Trifecta weekend. We knew the day before that a Category 4 hurricane was in the Pacific and could make landfall on the islands.  Most projections showed the hurricane downgrading to a tropical storm, but still, with a significant chance it could arrive as a Category 2 hurricane.  That possibility presented a whole different experience since a Category 2 hurricane is sustained winds of 96-110 miles per hour.  Imagine driving a hundred miles an hour sticking your face out the window.  No thank you!

The calm before the ‘storm’:

We arrived in Honolulu on Tuesday, August 21st at 6 pm, and it was absolutely beautiful.  It was like what you imagine Paradise to be when you get there.  You’d have never known there was a Category 4 Hurricane (sustained winds of NASCAR races) turning NW and working its way towards Hawaii.

We checked into our VRBO and decide to hit up the closest grocery store in downtown Waikiki.  The store is fully stocked with food and water and we’re able to easily grab stuff for dinner that night.  While eating, we proceed to geek out a bit on the incoming hurricane.  Thoughts started to occupy our minds: what was going to happen to the Spartan race?  Are flights going to start to be canceled?  Some of our friends on our message thread were talking about should they cancel or not?  Should we go?  What is really happening?  How honest is the media being with the public about its severity?

Wednesday, August 22nd 4 a.m. – Yes we woke up at 4 a.m., not because of the incoming hurricane but because we were still on PST. However, the hurricane was the first thing we looked up.  At this point, the hurricane had become a Category 5 (sustained winds of… who cares this is a crazy ass storm).  “Crap!!!”  was my first thought.  Next, it was like: let me really look into this thing because we all know when a hurricane hits landfall it generally loses steam.

At this point, the weather was still amazing. So, we decided to go check out an amazing sunrise, grab our snorkeling gear, and head to Hanauma Bay.  Our original plan was to snorkel Thursday, but we had a feeling the bay could be closed due to the expected increase in surf.  The water that day was cloudy and the surf was slightly increasing, letting us know no matter how much fun we are currently having, there is still a major storm out there and heading towards the islands.

We finish snorkeling and look at our email to see that the man, Joe DeSena, sent out an email letting us know that Spartan canceled all Friday and Saturday events. A decision on Sunday events would be made later.  This was supposed to be Bethany’s first beast and her first completed Trifecta. For me, it was my first go at an entire Trifecta weekend.

Our first thought was, this is UNDERSTANDABLE.  You couldn’t deny a storm was on its way and we still were unsure what category it was going to be or when (and if) it hit landfall.  The logistics, community resources, and personnel needed to put on a Hawaii Spartan Trifecta Weekend has to be enormous. You can’t just take those valuable resources and personnel from a community that may be dealing with a Category 2 hurricane.  I applaud Spartan for their decision.

Thursday, August 23rd 7 a.m. – we ran from our VRBO in Waikiki to Diamond Head State Monument.  The clouds were more prominent and the surf was noticeably up (as were the number of surfers).  We arrived at Diamond Head not sure if it would be open or closed and it was closed.  No worries on our end. We run back to our room along the beach because as desert dwellers we don’t get those opportunities often.

We get back to our place and see a sign on the door asking that we bring everything on the balcony inside.  This hurricane thing is starting to get real.  We check out and head to Laie in the NE corner of the island, where the remainder of our stay was planned.

First, we go get a rental car and groceries since uncertainty is still high. Our motto was the good ole’ prepare for the worst, hope for the best.  The grocery store was where the uncertainty of what was coming became a little more real.   The crazy thing was the grocery store was well stocked, but your first experience was not being able to find a cart… Seriously, no available carts can create tension?  Yeah, a little bit! I mean think about it; you haven’t even entered the store yet and you have nothing to carry your food…  what can the store look like?

Once we found a cart and entered the store it was well stocked and everyone was doing what they needed to. The vibe was that everyone was cool, calm and very respectful.  You could feel anxiousness of the pending storm, but you could also feel the hope folks had that it would dwindle and things would just get back to normal.

We eventually get to our place in Laie, and we are right across the street of Hukilau Beach.  The surf was in the 5-10′ range when normally it’s 1-2′, and the wind had definitely picked up.  The wind whipped around all night, rain was off and on, and the main part of the storm was still over 24 hours away.

At some point, the whole Spartan weekend was canceled; but at this point, that was the last thing on my mind.  Really just a confirmation email of something we already knew was going to happen.  Thoughts begin to run through my mind: closest shelter just in case, possible places to volunteer to help most affected areas, friends still possibly coming to the island…how is all of this going to play out?  The Spartan race weekend became of complete non-importance even though this is why we came.

Friday, August 24th – 7 a.m.  Hurricane Lane was still a Category 2 and still heading for Oahu.  Even though it was weakening, it was also slowing which meant it may not weaken as much as expected.  We went to the beach to do our travel strength and conditioning workout and there were consistent 35-40 mph winds.  The rain felt like constant pins pelting against our bodies.  We lasted about 40 minutes and then took the rest of the workout back to the place.

Throughout the day, the hurricane continued its weakening trend and by mid-afternoon, the storm became a legitimate Tropical Storm.  We received the news while hanging out with fellow Spartans for a Hurricane Lane party, and what a sense of relief when that news came out!! #wesurvived!

At this point, the worst was over (or never really started), depending on how you looked at the situation.  The next couple of days, Oahu was under a Flash Flood Warning.  Throughout the island, you could see where the rain was coming down.  A local informed us that Kuoloa Ranch (where Hawaii Spartan Trifecta weekend occurs) gets more rain than most parts of the island.  I will tell you: every time we drove by the ranch it was always covered in clouds.

As you can probably tell, the threat of a storm was real.  Choices fellow Spartans made and why were understandable.  Spartan canceling the whole Hawaii Spartan Trifecta weekend? We agreed it was the right call.

Though we didn’t understand it, some racers were upset.  Some felt they wasted money, some were upset they landed in Hawaii with no race (#firstworldproblems), others were upset for whatever other reasons.  We simply saw it as an opportunity to make new friends and explore the island in a way we wouldn’t have had time for if we’d been racing all weekend.  For the most part, those we came into contact with had the same outlook.

How about that impromptu Spartan Happy Hour where hundreds of racers converged for burpee contests, Spartan Says, and other fun contests?  I think Spartan really came through for those on the island by putting that together. If a hurricane had made landfall, it appeared Spartan was prepared to come through for the locals as well.

In the end, we chose to make the best of it.  We came home with stories for days and memories for a lifetime.  Who will we see in Hawaii next year? 😉