Can Anyone Win the $1 Million on Million Dollar Mile? 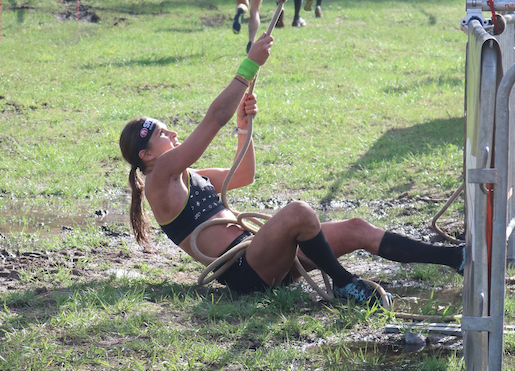 I was halfway done with this article a couple of weeks back when I discovered Million Dollar Mile was already being relegated to Saturday nights after a couple of episodes.  I contemplated even finishing the article at all and just trashing it altogether.  But, then I figured- this is still a great opportunity to discuss the fitness calibur of the OCR pros.  So, alas, I’m still going to give you this piece. And, my answer (read: opinion) is it depends on the contestant.  (Not what you wanted to read, I know).

Forget about the fact that the show obviously doesn’t want to hand out a million dollars every episode, and will be set up to make it incredibly difficult for anyone to win just based on that alone.

Let’s look at it from an athletic perspective.

From the onset, I believed it was going to be an uphill battle for anyone to win the jackpot on Million Dollar Mile.  Once I saw the first episode and the actual format of the show, my thoughts were basically confirmed.

So far, one contestant took home $50K and reached five of the obstacles, but he was caught.  Another took home $50K as well, but was caught by Hunter McIntyre. The closest a contestant has come to the million so far was Kayla Kobelin, who took home $100,000 (and potentially didn’t realize Orla Walsh was further behind than she thought.)

Kayla opted to exit the course even though she likely had time to keep going. Kayla is a professional triathlete, attempted American Ninja Warrior (Season 9), has completed in her fair share of OCR races (including qualifying for the OCR World Champs), and was previously a professional snowboarder until she fractured her neck. (She just recently signed on as a sponsored snowboarder once again).  Kayla is not your average Million Dollar Mile contestant, and going into the show, she clearly had the best chance at the million out of every contestant so far.

Let’s look at the Defenders:

Eight of the ten defenders on Million Dollar Mile are elite/professional OCR athletes.  This course is what they do.  It’s what they train for.  They darn well better be good at it.  Those involved in OCR know that professional OCR athletes are not like any other athlete.  In order to do well in OCR and be a professional, hours upon hours of training per week are required.  And, the training must better the athlete in several disciplines: speed, endurance, strength, agility, balance, and grit, to name a few.

So far, they’ve had dancers, marathoners, a SWAT Officer, a sprint triathlete, and more.  While these are absolutely things that require exceptional fitness, fitness that is singularly-focused on one discipline  doesn’t simultaneously set someone up for success against an elite OCR athlete.  Here’s why:

OCR isn’t like other sports, where strength training and a focus on the actual sport is the bulk of training.

Take a 100-meter sprint for example.  Sprinters aren’t focused on endurance.  They’re focused on speed.  They strength train in the gym to become strong, but their focus is speed.  They do speed workouts, on a track.

A gymnast? Strength training, and gymnastics routines.  Baseball? Strength training, at-bats, and practice games.  You get the idea.  An OCR athlete can’t just strength train and run practice OCR races.  It’s just not what’s going to get them to the top.  They must practice running for speed, endurance, for mountainous, flat, wet, muddy or snowy terrain, etc…. In addition, they focus on strength training, grip strength, and having the grit to keep going when a race makes you want to crawl into a hole and die.  It’s really a must to have total body fitness that is multi-focused in order to be at the top in OCR.

As Veejay Jones says in the beginning of Episode 4: “Speed, strength, endurance… you have to perfect so many different disciplines to be an elite in this sport.  I train six days a week; there isn’t a runner in this competition that’s gonna outrun me.”

Later, in the same episode, Robert Killian re-emphasizes this during the Defender Introduction.  He says: “I think I can defend the Million Dollar Mile ’cause no one has all the skill sets that I have, combined into one total package.  You can be the strongest guy out there, you can be the fastest, but it really takes mental toughness and confidence in your abilities. I can do that better than anyone else.”

And again it’s emphasized to the contestant: “Hey, good luck man.  You know what it takes out there, it takes speed, strength, and endurance, but most importantly, it takes confidence and grit.”

Even runners who can get to obstacles quickly, but haven’t competed in OCR, don’t take into account the heart rate factor.  It will spike when you run, drop when you approach the obstacle, and spike back up when you run again.  This is something that can be capitalized on when you’ve done it, are used to it, and trained for it.  Otherwise, it’s just plain exhausting and not something you prepared for to be a factor.  This results in “needing to catch your breath” while the defender has trained through this and it’s not a factor.

Even if Million Dollar Mile somehow managed to stick around, it’s highly unlikely anyone will ever win the million, unless they’re an equally high calibur athlete dedicated to bettering themselves at multiple disciplines.  Hence why Kayla was able to do so well.  The average “fit” contestant has the odds stacked against them, in my opinion.

If you’re looking to just do an OCR and not necessarily compete, head on over to our previous article on why anyone can do an OCR.  You don’t HAVE to be super athletic or super human to participate!

Have you watched any of the episodes?  What are your thoughts?  Do you agree or disagree?