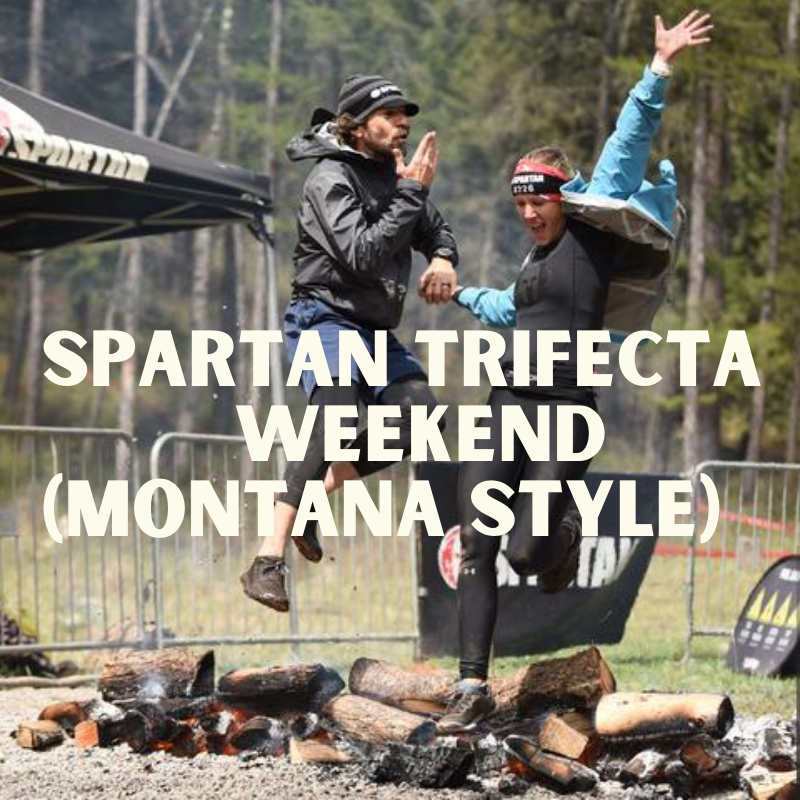 Well, not really.  Technically this was my third Spartan Trifecta Weekend, but it was the first time I actually completed all three races in a weekend.

Previously, I registered for the Hawaii Trifecta weekend in 2019 and the Utah Trifecta weekend in 2021.  I managed 5th place in both beasts, 3rd place in both supers, and a big fat DNS (did not start) in both sprints. I did have a valid reason for not starting the Spartan Sprint in Hawaii, which was medical-related, but I simply chose not to run the sprint in Utah because it was freaking hot.  It wasn’t until much later that it dawned on me that I had the same exact 5th, 3rd, and DNS results for both weekends I had registered for.  Womp womp.  I felt like redemption was waiting.

So, we decided to head up to Montana this year where Eddie would take on his second Elite heat Spartan Ultra, and I would again attempt a Spartan Trifecta Weekend. Heading into this weekend, I had been dealing with a calf issue.  I had basically taken 3 weeks off of running prior to Montana (minus a 10k trail run that I couldn’t transfer or get my money back on).  I spent those three weeks babying my calf, foam rolling, lots of stretching, using our Spartan ToughDoc massage gun, cupping, yoga… you name it. All the recovery things.

I was ecstatic when race day came and my issue appeared to be gone.  It never bothered me and I was so grateful for it. One less thing to worry about for the weekend.

The real issue was weather.  For a lifetime desert dweller… rain, sleet, snow, wind, and chilly temps in the 40’s is cold! I literally ran in a rain jacket for all three races.

Saturday’s Ultra and Beast races faced basically every kind of weather possible.  It was so windy in spots that my hoodie on my rain jacket wouldn’t stay put on my head.  Oh well, I thought. Going to be getting wet in the dunk wall anyway.  Then it dawned on me that I should’ve passed the dunk wall by that point.

Turns out, they removed dunk wall from the course altogether but I hadn’t gotten that memo before race weekend.  Sunday’s Super and Sprint were relatively nice for the most part. It was chilly, but it didn’t rain while I was out there.  It did snow, however, while Eddie and I were waiting to run the sprint.

I personally really enjoyed the course itself and would continue coming back to this venue.   Eddie’s first beast was at this venue in 2017, so he kind of knew what to expect.  I had only experienced it from a spectator viewpoint previously.

There were a handful of really steep climbs, some short and some pretty lengthy, including a respectable steep-turned-gradual one immediately from the start line.

There was an awesome descent toward the end that had the perfect level of risk factor as well.  Might eat it, might lose control, one misstep and you’re tumbling down, but with enough focus, you might just bomb down it uninjured with your heart rate sky high and adrenaline pumping for the competitive trail runner’s dream descent. For me it was the latter, and I had so much fun bombing down that hill going into atlas carry.  I was excited that the descent was on all three distances!

Some of the views from the top were incredible! The lake, mountains, all the trees! It was all so beautiful.  This photo was one Eddie took from the top right after the rope climb. 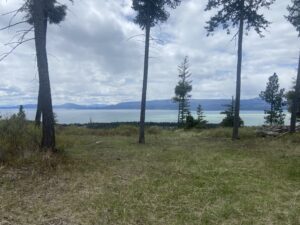 MORE ON THE COURSE:

There was a fair amount of bush-whacking, which I don’t personally mind.  There was also another descent on the beast course that was a narrow single track and boy was it slippery.  I found myself kind of dragging my hand along the chain link fence ready to grab a hold of it any minute as I went down the hill because gravity and momentum kept you moving down pretty fast. I was sliding every other step trying not to fall. It was just that slippery kind of mud that can send you flying.

Elevation gain was consistent with many other mountain races.  According to our Garmin watches, the ultra had about 7,600 feet, the beast 3,300, the super 1,600, and the sprint had just under 1,000 feet of elevation gain.

The obstacles were all pretty typical (3 barbed wire crawls, spear, atlas carry, tyro traverse, walls, herc hoist, etc).  I think the 2nd barbed wire crawl was put up in place of the dunk wall.  Spearman was placed right at the end before slip wall and fire jump.  In the super I ran a clean race right up until that darn spear throw.  Watched 1st and 2nd nail their spear and go right past me as I was on number 20-something burpee.  I couldn’t get them done quickly enough to catch back up in that short amount of distance and wound up in 3rd.

Eddie wound up taking 5th in his elite ultra and my overall results for the weekend were Beast: 6th, Super: 3rd, Sprint: open heat but I started and finished it! Woohoo!

(Unrelated point: While it was fun to do an open heat sprint, I do think they should reinstate competitive heats for the sprints on trifecta weekends.  How else can you practice race day pace/obstacle experience at a competitive level for 3 races in a weekend if one of your races has to be non-competitive? It makes zero sense to offer 2/3 competitive races during the season, but then expect racers to compete in 3/3 races for Trifecta World Championships. #BringBackCompetition)

Once we finished racing for the weekend we headed over to grab our free drink.  We opted for the Athletic Brewing non-alcoholic beer.  Even though we enjoy our fair share of alcoholic beer, the Athletic Brewing beer is really good! While we were hanging out in the festival area, we couldn’t help but notice that it was the most packed we had seen a Spartan festival area since pre-COVID.  There were literally people everywhere despite the bipolar weather.  (And it was definitely bipolar… the sunshine came out while we were sitting there, only to start snowing again minutes later.)

My former boss from a brewery I worked at in college in Tempe, AZ, moved to the area years ago to open his own brewery in Montana: Tamarack Brewing. (It’s located on the opposite side of Flathead Lake from the Spartan venue, but not a far drive and totally worth checking out.)  Naturally, we stopped in.  He put it best when he said: “Welcome to Montana weather.  If you don’t like it, wait five minutes and it’ll change.”

There was on-site parking for staff, volunteers, ADA racers, the ultra racers on Saturday, and the trail racers on Sunday. Everyone else had to take a shuttle to the venue.  The parking for the shuttle is approximately 20 minutes away.  On Saturday we were fortunate to be able to park onsite since Eddie was doing the ultra.  Thank heavens because it was cold, pouring rain, and I didn’t start until 2 hours after him.  I went back to the car and took a nap.

On Sunday, I took the shuttle.  It was a little tricky to pack clothes for a second race along with clothes to stay warm between both races and after the final race. Other than just needing to plan clothing appropriately, it wasn’t that bad of a shuttle ride.  It seemed to go relatively quickly.  There was a several minute walk from the shuttle drop off to registration.

Have you done this venue? I think it should be on everyone’s bucket list to do at least once in their Spartan history.

Looking for custom run plans to crush your next race? Do you want to level up your training by incorporating proper strength training into your routine?   We’re here to help you succeed.

More information on our training programs can be found here.