ON YOUR LEFT! Trail Etiquette for the Novice 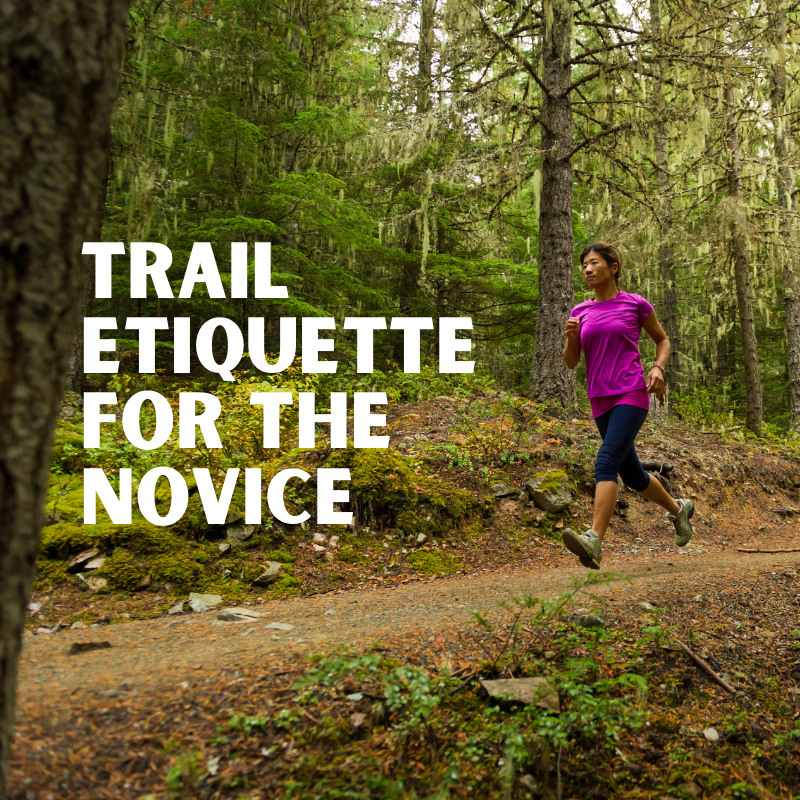 TRAIL ETIQUETTE FOR THE NOVICE:

I see it all the time… people not engaging in proper trail etiquette on both training runs and, unfortunately, while racing.

While I’d like to give everyone the benefit of the doubt, I know that some people have an issue with being passed by someone faster and just simply will not move.  Unfortunately, I experience this often as a decently fast female.  These people are few, but they exist.

Others simply just don’t know trail etiquette, especially if they are new to using trails or racing single track.

In a training run, it’s irritating.  In a race, it’s downright rude.

Generally speaking, in an obstacle or trail race humans would do well to keep in mind the following:

So, what is proper trail etiquette (in most places, anyway!)?

Generally speaking, there is a 3-way yield system on trails between hikers, bikers, and horses. Runners fall into the “hikers” category, but when it comes to hikers v runners… it can sometimes be a troublesome issue.

Are you both going the same direction? If you’re approaching (or being approached) by a faster runner or hiker, the faster runner should state “ON YOUR LEFT” loud and clear.  The person being passed has a responsibility to move to their right so you can safely pass on the left.  The faster person gets the right of way.

You should NEVER refuse to move for someone moving faster than you. It’s dangerous and rude.  If you are on a typical trail run or mid-race and the person can’t move right away (remember, it also needs to be safe for them to move over), give them a little bit to figure out where they can go.  It’s common courtesy for the person being passed to indicate they’ll move as soon as possible, but not expected.

If you’re both heading toward one another, you both should just simply move to your right if at all possible, allowing both of you to safely pass each other and carry on.

Now, chances are you aren’t going to be seeing any horses or bikes on an obstacle course or trail race. However, these are good trail etiquette habits to practice while out on your training runs so we’ll still go over the proper procedures for those scenarios.

This one is the trickiest in my opinion. Essentially, bikers technically are supposed to yield to EVERYONE.  This is because they are able to maneuver more easily without injuring anyone else or themselves.  Keep in mind that the level of experience a biker has may also dictate their ability to maneuver easily or not. A lot of bikers know the right-of-way structure, but it also seems that just as many don’t (or don’t care).

When you are on a trail run and a biker approaches, you technically always have the right of way, and it’s yours to decide to yield.  A biker should never assume the right of way (though they often do in my experience).  However, the situation sometimes calls for common sense and just allowing the biker to go first.

When a biker approaches, there are several things to consider.

First– are you on a hill or a flat?  If you are on a hill, are you and/or the biker going up or down the hill? Are you coming toward each other from opposite directions, etc…?

Everyone yields to a horse.  It does not matter the trail, situation, etc…

Give them a wide spot to pass in, even if this means slightly stepping off the trail.  If you’re on a hill, step to the more downhill side. Horses are more likely to run uphill than downhill when spooked.  Don’t make any rash movements that will startle the horse.

I generally stop running about a minimum of 10 yards (or 30 feet) away when I spot a horse.  I’ll move over until the horse rider either tells me it’s safe to proceed or they pass by me.  If I’ve approached the horse/rider from behind, I stop the same distance away and call to the rider, asking if I may pass when they deem it safe.  The last thing you want to do is spook a horse and have its owner get bucked off.

This is often a hot topic.  Listening to music out on the trail.  Personally, I’m a weirdo who prefers the radio silence of my head and to listen to nature.  I never listen to music when running.  It’s okay if you do!  But, you should keep in mind the following:

Obstacle course races and trail races often do not allow you to listen to music out on a race course for the safety of all runners.  One reason is that a lot of these races take place with large portions on single-track trails making the ability to pass hard enough to begin with.

What if a race does allow music?

If a race allows music, there may be a rule limiting only one earbud in. The race might also ask that music is low enough to hear your surroundings.  Aftershokz are a great alternative!  They sit outside of your ears and you can listen to music and have a conversation simultaneously.

Ragnar has a pretty good happy-medium music policy for their trail races (scroll down on the linked page to read it over.)

There’s nothing worse than saying on your left like 4x only to go ahead and decide to pass thinking the person is just a jerk! You pass and realize they can’t hear you because they have two earbuds in and the music up loud. Wonderful.

(Though it’s fun to watch the person jump and get scared as you pass because they didn’t hear you.)

But seriously, having only one earbud in lends itself to several practicalities: it’s simply safest and it allows for common courtesy to those around you. You’ll hear when people call out to pass by, or a biker’s spokes are spinning and coming up super fast.  It also allows you to hear nature that may be harmful to you… here in Phoenix? Let’s call it rattlesnakes. Would hate to be bit because The Weeknd’s jamming loud covering up the warning rattle!

In need of more running tips, tricks, or other help crushing the course?