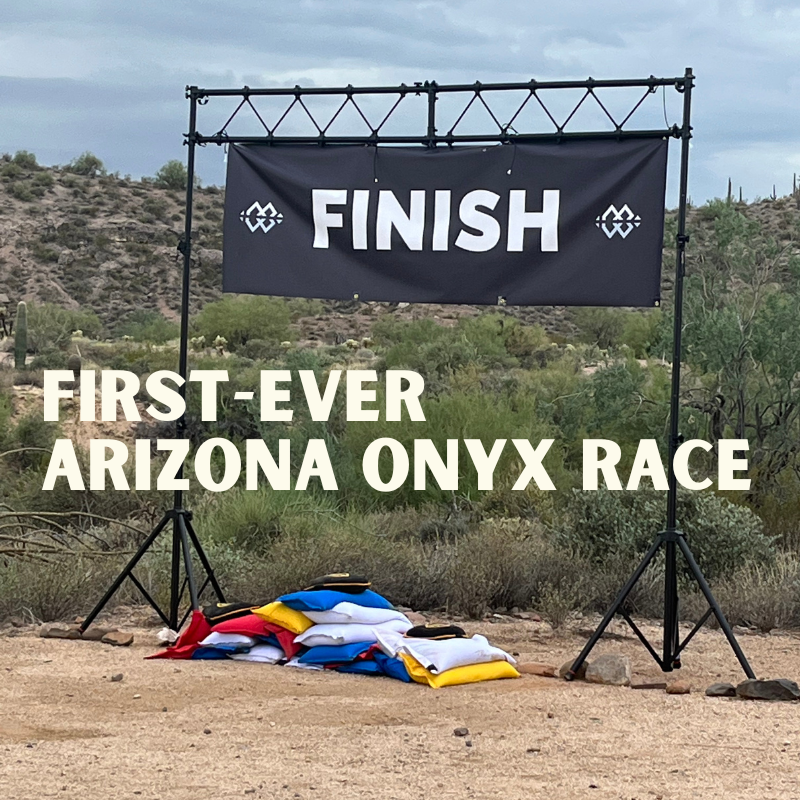 Over the weekend, we took on the brand new Arizona Onyx trail race by Double Black Events at the McDowell Mountains in Scottsdale, AZ.

It had an interesting premise: pick 1 or more of the 5 trails to run and then run to the turnaround point.  At the turnaround point, select either a flag or sandbag and run back with it.  Each trail had a predetermined assigned point value based on its length and elevation gain.  Flags were worth the stated point total, and sandbags would double your points earned for the trail.  Now, gather as many points as possible in either a 2- or 4-hour window based upon which race you signed up for: the Onyx (4-hr) or the Onyx Half (2-hr).

We signed up for the Arizona Onyx Half and set up our game plan to best play to both our strengths and what we thought it would take to win.  I was slightly nervous that we’d be running in the desert mid-October from 8-10am because typically it’s still pretty warm (if not hot) here that time of year.

I definitely had to adjust my game plan as I went.  I had initially planned to do the red (6 miles) and either the blue (5 miles) or yellow trail (4 miles) if time allowed.

At the start line, they announced that due to an issue on the trail, they had to adjust the red trail and it was now 6.8 miles.  When I got to the turnaround point, my Garmin had actually tracked the red trail at 3.67, which meant it would be about 7.34 in total.  No big deal.  I grabbed the red 25-pound sandbag and headed back, but I knew I would likely not have time to do either the yellow or blue in addition.

Once I got back to the sandbag drop-off area, I made the decision to book it on to the white trail (about 1.3 miles total) and grabbed a white sandbag (40 pounds).  At this point I was pretty exhausted, but worked my way back knowing it wasn’t nearly as far as I had just carried the other one.  I dumped the bag off and headed back out to try and grab a white flag to top my points off.

Took a quick glance at the leaderboard and saw that my suspicion was correct: I was in first.  I  knew I probably didn’t need to go back out, but I thought it’d be nice to try and set the bar high.  I also wanted to make sure nothing changed in the next handful of minutes if I could help it.  Never give up until it’s over!  I grabbed a white flag and tried to book my way back, but I cramped up a little bit and walked for a minute.  I literally missed the cutoff to turn the flag in for points by about 2 minutes. Oh well!

AND HOW IT ALSO WENT:

Eddie, on the other hand, had an unfortunate race.  He chose to do the black trail (12 miles roundtrip/30-lb sandbag).  There was miscommunication on the black trail. Eddie was the only Onyx Half participant to even brave trying to do the black trail in 2 hours.  Despite there being 3 sandbags upon his arrival to the turnaround point, the volunteer refused to let him take a sandbag and insisted he had to stand there and wait until the top of the hour or take a flag.  (Eddie had made it out to the 6-mile turnaround point in well under 45 minutes, leaving himself 75+ minutes to get back with a sandbag).  I won’t go into further detail about the incident as he did discuss this with the race director already and he was very apologetic.

However, this is an honest review of the race and I’d be remiss not to briefly mention something that ruined a racer’s experience and cost a win.  Had he been allowed to take the sandbag sitting there, he would have earned 424 points — well above what the winning point total ended up being.

Despite this one incident, the rest of the race was really well run and it seemed super organized.  As with any new event, there will be kinks to iron out and lessons learned.  It seemed to me that most participants really enjoyed themselves (and the weather ended up being amazing and overcast!)

The race was well laid out.  Each participant was given a bib (which was super nice material, by the way) and a matching wristband to wear.  You could wear one or both but had to at least wear the wristband with your number.

The tents point to drop sandbags and flags off was easily accessible and well-marked.  Each trail (as shown below) had a colored flag so you knew which trail was which by just a glance.  The trails themselves were marked pretty well also.  I did have one long section that wasn’t marked on the red trail that left me questioning if I had missed a turn, but I kept going and eventually saw markings below and ahead near a wash.  The black trail also had a long (approx 3-4 miles) stretch with no markings on it.  However, proper warning was given at the start line that this could be the case in some spots, so no big deal.

The volunteer at the red trail turnaround point asked if I was okay on water. I thought that was incredibly thoughtful, and the volunteer at the white aid station was super friendly.  I spent a minute or two chatting with him as I downed some water.

The race had a plethora of Liquid Death water, Endure Elite, snacks, CBD, etc… in the shaded recovery tent which was unexpected but welcome.  The race director also ensure there was plenty of seating for everyone to relax after they were finished.

The podiums were a mound of sandbags, which I thought was super creative, and the top 5 men and women in the Onyx full (4-hour) earned prize money.  The Onyx half top 3 male and female earned pretty cool flags. The finisher prize was actually a fillable sandbag instead of a medal or shirt, along with a Double Black Events JUNK-branded headband.  Pretty cool! 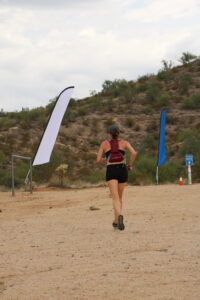 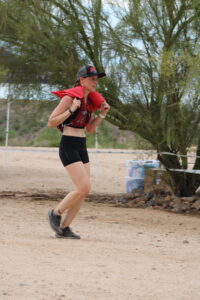 The Arizona Onyx race really was a lot of fun.  I’m not sure I will ever complain about a Spartan sandbag carry in the future.

The aspect of not knowing where my competition was during the Arizona Onyx race was surprisingly enjoyable.  I only saw one female Onyx half participant on the red trail and I was already on my way back with the bag when I saw her, so I was able to get an estimate of how far in front I was.  I knew that if anyone could complete the black trail, I would maybe still have a shot at 2nd or 3rd.  Once I went out to the white trail and saw the other ladies on it, I knew they hadn’t done the red or black trail and that they wouldn’t be able to get enough points.  This kept my mind busy for a majority of the race, and I really liked that aspect.  I had to figure out the race, strategize, re-strategize, etc…

I’d definitely encourage giving the Arizona Onyx race a shot.  If I can make it to the next one, I will! If you did this race, let’s hear your thoughts below!

IN NEED OF RUNNING OR STRENGTH TRAINING TO CRUSH THE COURSE? 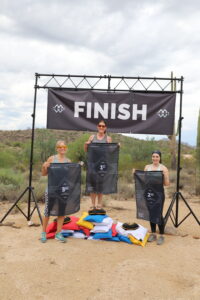