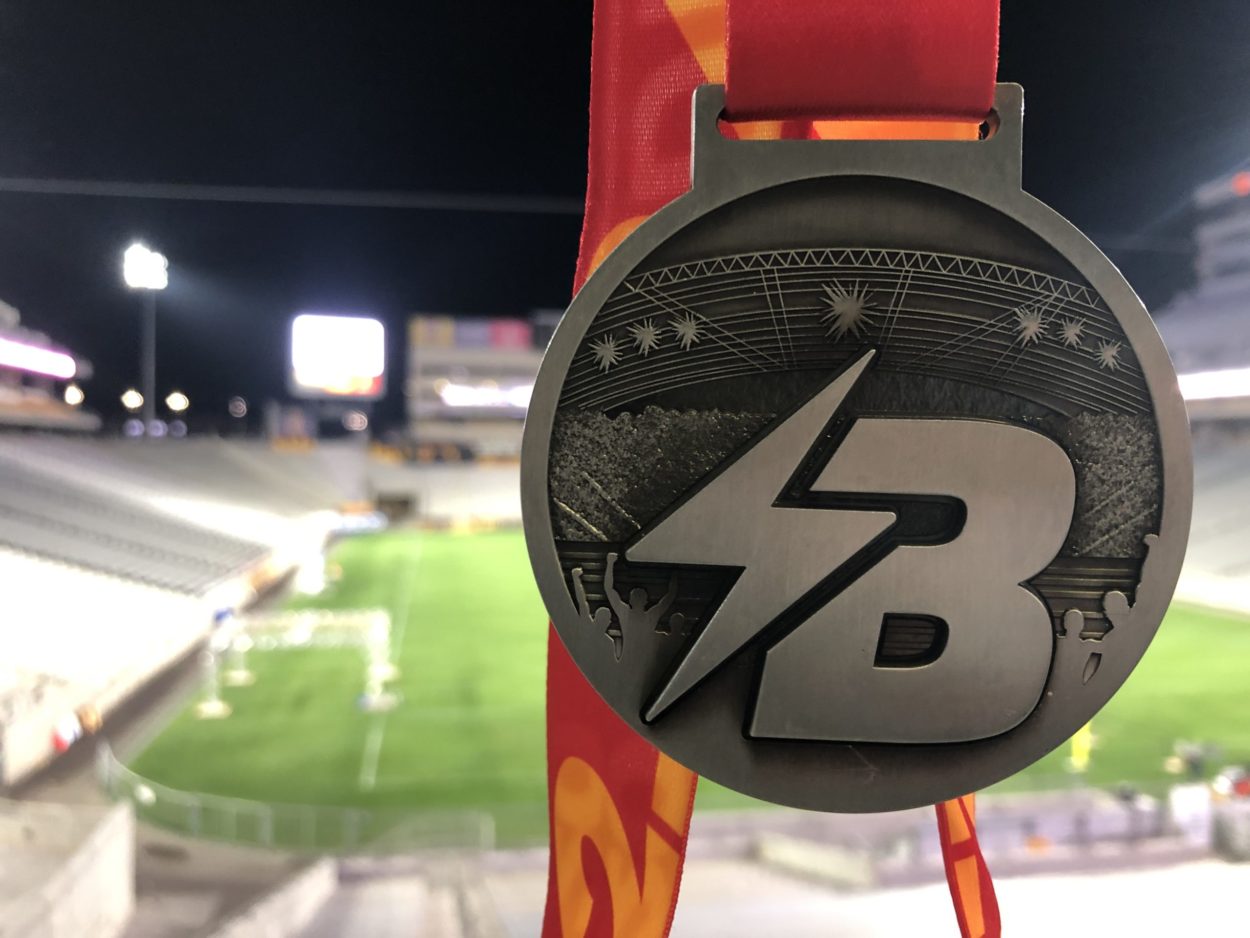 You may have heard about a new OCR series making the rounds: Stadium Blitz.  We did the one at ASU this past weekend, and it deserves a race review.

The Stadium Blitz is a 5k OCR, held in college stadiums across the USA, with 15 obstacles at varying degrees of difficulty.  The races are in the early evening/night, which is a nice change of pace.  The obstacles are divided into three sets of difficulty:

For a clean race, you’ll earn 3,000 points.  Subtract points for any failed obstacle.  If you finish in under 40 minutes, you can earn an extra 2,000 points as a time bonus.  In addition, for every second under 40 minutes that you finish, there’s an additional time bonus equaling 1 point per second (so if you come in at 39 minutes exactly, you gain 2000 + 60 bonus points).

There are different factors that contribute to your overall placement.

Even with the points system, timing still matters for competitive heats to a degree; but, this race is not won on time alone.  For example, I crossed the finish line in the competitive heat as the second place female (time-wise), which would normally have me on the podium.  But, here are the contributing factors that led to me missing the podium:

Here’s an example of race results, so you can see the breakdown of points and how a fast time is only a contributing factor to winning an award:

There’s also an element of strategy involved in the Stadium Blitz, which I really liked.  And, it seemed to change as the race went on depending upon where you were.  One of my friends chose to skip the last obstacle at 200 points because she was on the bubble for getting the 2,000 point bonus.  In this instance, skipping to ensure you get the time bonus makes sense.

However, if you strategically decide to skip an obstacle to get a faster time somewhere in the middle of the race, I’m not sure you would get enough points from the time bonus to make it worth skipping the obstacle if you’re vying for podium unless you’re crushing out a 5-minute mile.

Since you can’t skip the 100-point obstacles, you would have to skip something with a minimum of 200 points.  That’s roughly 3:30 minutes faster you’d have to finish the race to make up for that loss (to get the 200 points back – and this assumes you are under 40 minutes).  And you’d have to finish 4+ minutes faster to gain extra points from skipping.  Otherwise, it’s a wash. It takes a minute or less to complete an obstacle, so it seems to me 100% obstacle completion is going to have you on the podium, not skipping obstacles.

My strategy changed after I failed the first obstacle.  I knew I would be missing those points, and so I decided to try and push my pace even faster to capitalize on the 1 point per second time bonus.  I also knew I could not skip anything at that point (but also wasn’t planning on failing another obstacle.)  That balance beam is slightly wobbly and extremely narrow/thin! I was not worried about it at all pre-race until I ran up and saw how thin it was.  This is a one-attempt obstacle.

I failed two obstacles that equaled 500 points (hang time and toe the line).  No idea how I got points for hang time…  I absolutely did not scan my chip at either obstacle I failed… per the rules.  I did; however, scan my chip twice at the Spin Class obstacle because the obstacle was in the festival area and I couldn’t hear if it registered my points over the music.  So, I scanned again to be sure I got the points.  I had no idea it might register them twice.

The results show I got the max 300 points for that obstacle and actually didn’t get extra points there.  But, somehow I got points on an obstacle that I never scanned my chip for: Hang Time.  I have no idea how this happened.  (Yes, I emailed to let them know because it would affect my placement by several spots and bump a few people up a spot).

My husband and our friend Jose were first and second across the finish line for competitive males.  However, in an attempt to beat each other to the finish line, they both forgot to scan the last obstacle after completion for points.  People were shouting at them to scan for points and they both turned around to go back and scan, and then sprinted again against each other to the finish line.  They both came in at under 30 minutes. However, there was no rule on a scenario like this.  They both completed the obstacle, ran back to scan their chips after they passed the scanner, and then finished.

They spoke to the race director afterward, and it was decided that neither of them would get points for that obstacle.  I do think it’s a little odd to penalize racers for something there was no rule for at the time.  Instead of Jose finishing in first and my husband in fourth, they took 4th and 12th, respectively due to this.  But, you are supposed to scan as you pass it by, so the enforcement (even of a non-existent rule) kind of makes sense.

Lesson learned: DON’T FORGET TO SCAN!  This can actually be difficult to remember when you’re running your butt off pushing your body to the limits!

In addition, on their website it says that the number of reps for things like speed rope and kettlebell swings is 20, yet they told us 15 when we were in the starting corral.  It was a welcome surprise to only have to do 15, but their website differs.  I had been expecting 20.

It’s not very clear (other than the balance beam) whether obstacles are multi-attempt or not.  My husband and I both heard completely different things when they gave direction at the beginning, and it’s not on the website.  When I failed hang time, I couldn’t remember and asked the volunteer.  She didn’t know, so I just kept going to the next obstacle.  Also, apparently some of the Gronkowski brothers were standing at this obstacle cheering racers on.  I was focused and I had no idea.  And I failed it. Right in front of them. Embarrassing!

Overall, this was a really fun race and the obstacles are different from the other OCR races currently out there.  It’s a good blend for new and experienced OCR racers alike.

I really liked the Spin Class obstacle (think multi-rig with rings).  Two of the rings spin and then stop, so you really need to make certain your grip is on point and you’re prepared for that jolt.  The plate pull/push was incredibly difficult.  I can typically push 100+ pounds in an intense strength training session.  The female sled had no weight on it, and yet, I had so much trouble getting it to move.  They had it on grass, so I’m not sure if the grass was acting like a stopper or what.  It took forever to complete, and I noticed a handful of other racers having the same issue.  The Blitz Bag (sandbag carry), kettlebells, and plate pull/push do have different weights for female/male.

The open heats go first, with racers being started every minute or so.  They stop sending racers off 45-60 minutes prior to letting the competitive heat race, so as to clear the stadium.  Having the competitive heat allows for people to push themselves while also letting others go without feeling intimidated.  I also felt like it allowed for spectators to stay and cheer the competitive racers on.  Typically when competitive goes first, they tend to leave and then come back for awards if necessary.

The race swag is a medal (custom with university colors, name, and date) and a pretty cool pair of performance socks.  They also had university-specific shirts and other swag for sale as well.  You also get free photos in a timely manner.  They’re already up less than 48 hours post-race.

Last, if you finish in the top five for men or women, you can qualify for the Stadium Blitz championship race later this year (location still to be announced).

There were lots of folks dancing and having a great time in the festival area (I think they call it the Blitz Zone).  The beer choice was decent for the free beer you get, and the Gronkowski brothers were actually mingling and talking to lots of racers.  They were all extremely nice and seemed to really care about the future of the race.  I’ve heard from several racers that provided feedback, and they graciously accepted it and thanked each of them for the feedback.

Conclusion: if you’re looking for a new and different kind of OCR, you should definitely give the Stadium Blitz a try.  It was a ton of fun!

Update:  On 3/3, I received an email in response to my incorrect point total.  It is NOT possible to get double points on an obstacle, and it was determined that it’s possible the scanner just registered my chip as I ran by it.  They have already been working to dial the scanners back and this is already in the works to be fixed. Adding “lanes” after an obstacle is also something they are working to add in order to prevent accidental readings.  Last, they are also updating my points to reflect the correct, lesser total.  Congrats to those bumping up a spot! (I also updated my math above for the time to points ratio.  Math is not my strong suit, ha!)

PS – If you’re looking to train for your next OCR, check out our strength training, cardio, and flex packages.