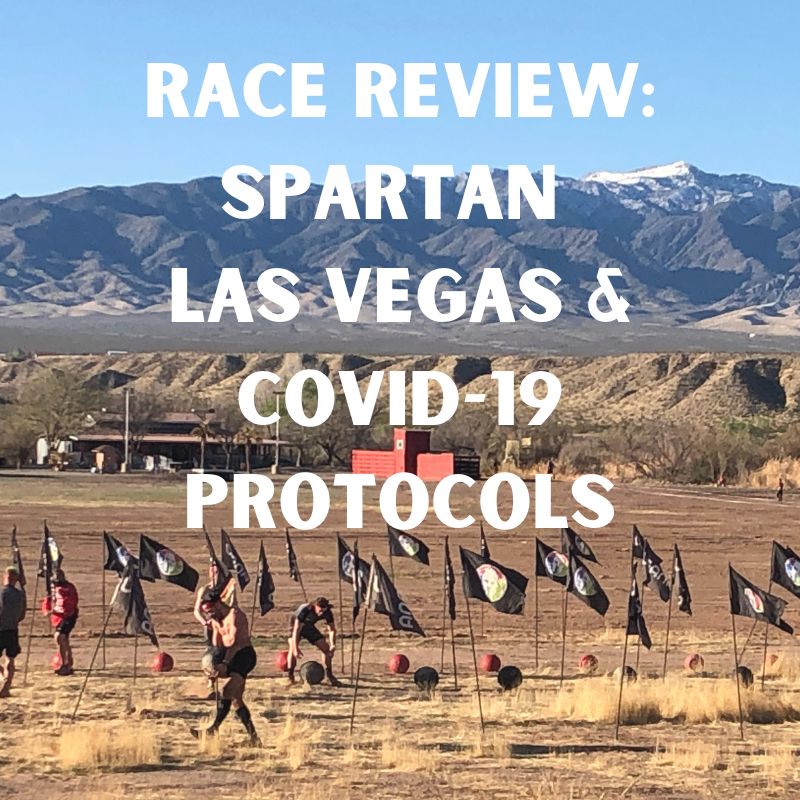 Let me start by saying how amazing it felt to get out to a Spartan Race, get on the course, and see some of the OCR Community!!!

As a little side note before I get into the safety protocols: to be honest, the past year has, at times, brought us a lot of anxiety.

We’ve of course had our individual up and down days, like I think pretty much everyone in the world. But, we focused on what we could control and what made us happy.  Neither of us were unemployed, sick, or experiencing any other hardships, and for that we are blessed.  For us, what we could control and made us happy was continuing to eat healthy and train.  We bought what equipment was available (or even on backorder) and waited for it to show up while we continued to train at home and outside in place of our closed gym.

As you may have read, we signed up for TONS of virtual runs to help keep companies afloat and keep us motivated. We continued to follow our strength training programs, modifying when we didn’t have the tools we needed, and Eddie continued to write and adjust our running programs as necessary.

So, when we realized a real, live Spartan Race was going to take place a few hours away in “Las Vegas” in late March 2021…. Eddie got on the horn and signed up!

As for me, I had other priorities and halted all my training on 3/2.  I did not think I would be competing at all this year even if races returned.  Unfortunately, as it turned out, this was only temporary and I realized I could compete this year… with this realization coming only a week before Spartan Las Vegas.  (I won’t get into the topic here as to why. If you follow me on Instagram, you’ve probably read all about it already.)

Once I was signed up for the Spartan Sprint (the super was sold out!), I began to wonder what it was going to be like to do a live, in-person race in a COVID-19 world.  Here I was, looking at the very thing I longed to do all of 2020, and now completely nervous to actually show up and race come 2021. Our last live race prior to the 2021 Spartan Las Vegas was the Stadium Blitz at ASU on 2/29/2020,  just before COVID invaded our lives. (I always did think leap years presented issues.)

Questions swirled through my mind, and here came the anxiety rushing back now that I had actually signed up for the race.  Some of my concerns were eased upon scouring photos from both Spartan Races in Jacksonville and San Antonio the couple of weeks prior. But, the questions continued in my head: would people just wave from afar, fist bump, hug, stay in their own little pods? Was it going to be so strict that it wouldn’t be fun? How would they enforce certain things… and on and on and on.

So… here’s my view on it in case you’re hesitant to sign up because of the unknown.

To elaborate more on the 30-minute entrance rule:

In our experience at Spartan Las Vegas, the actual heat starting times were inconsistent from what our assigned start times were.

No wonder the “30-minute” entrance rule felt so crunched for time.

To be behind schedule isn’t a big deal.  For racers wanting to compete in the same batch as a majority of their own heat, it’s less than ideal to be sending racers off before assigned start times in my opinion.

It wasn’t entirely clear if the whole age group was being sent off at once or in batches.  If in batches, I suppose this is less of an issue in the end much like the stadion races.  Just something to keep in mind.  Granted, this was one race weekend and we know that this is not the typical experience from Spartan.

As for the festival area, it seemed people stayed close to those they already knew.  There was not a lot of congregating in the festival area amongst racers as is typical in many races.  The beer area was not confined.  You could walk around with your drink, making any chance of mass congregating less likely.

Overall, the experience felt different, but it was still a great time. Once you got out onto the course itself, it felt so, so normal.  And, don’t we all need a little bit of the chance to just feel normal these days?  Let me tell you, getting out there and racing was so good for the soul.

I can’t wait for more!

If you need help training for your next Spartan Race or other obstacle course race, let us know! We offer custom running plans and full strength training programs written by a Certified Strength and Conditioning Specialist) that are sure to help you crush the course.