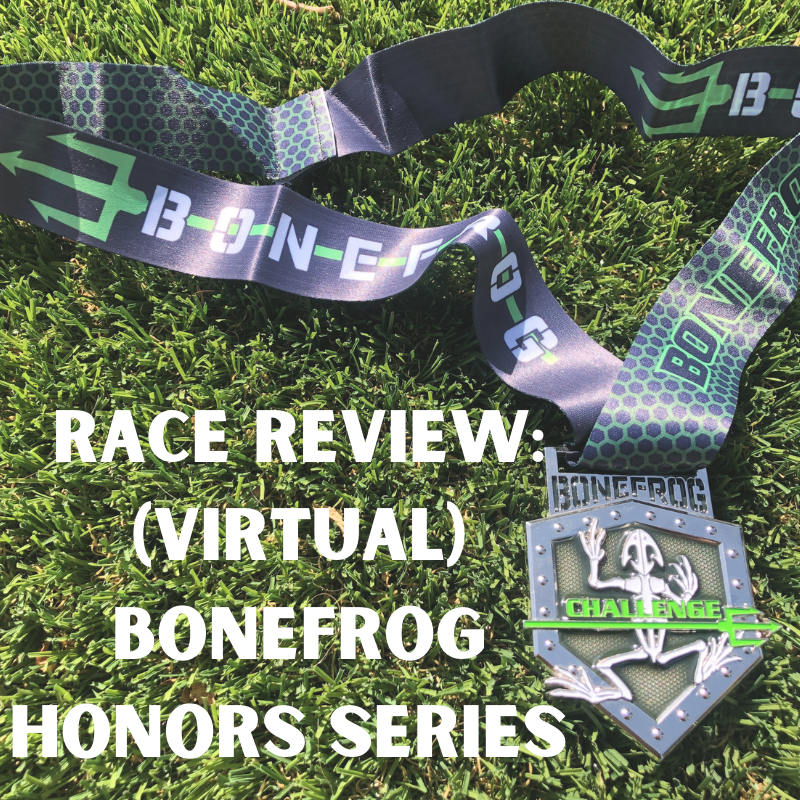 In 2020, we completed one of the Bonefrog Challenge virtual races at the Tier 1 level, and let me tell you: challenge is the keyword there because it was challenging.  I’ve said many times that I felt the Bonefrog Challenge virtual option was the most challenging and pushed me the most out of every virtual race we did last year… and that was several, so I feel I’ve definitely got a good list to compare Bonefrog’s up against.

For a rough idea, we completed the following virtual races last year:

Since we have a lull in our race calendar so far this year, we decided to test ourselves again and take on a second and third Bonefrog Challenge! They came out with an Honor Challenge Series, where each version is in honor of a different soldier.  First up, we did Honor Challenge 4.0 honoring EOD2 SEAL Mike Monsoor.

THE HONOR CHALLENGES WE CHOSE:

Mike Monsoor is one of the SEALs whom the Mike & Murph Bonefrog race obstacle was named for. He was killed during Operation Iraqi Freedom on September 29, 2006, when an insurgent threw a grenade onto a rooftop where he and several other SEALs and Iraqi soldiers were positioned.

Monsoor acted quickly to smother the grenade with his body, absorbing the resulting explosion and saving others from serious injury or death. Monsoor died about 30 minutes later from wounds caused by the grenade explosion.

We also purchased the Honor Challenge 5.0, honoring Collin Thomas who completed several tours and died in combat operations in Afghanistan in 2010. We plan to complete version 5 in the coming days.  I expect it to be just as challenging as the others we have done and look forward to pushing myself again.

They just released a tenth version honoring Christopher Scott Kyle (well known in the military and amongst other SEALs for his heroic actions in combat and high number of confirmed kills, but also well known to the public courtesy of the movie American Sniper.)

The Honor Challenges, in our experience so far, consist of a mix of running and mostly bodyweight exercises, but it’s the clever way it’s laid out that makes it challenging.  If you give it your all, it’s a constant barrage of your heart rate going up and down, up and down, over and over and over again until the very last second.

SO…HOW DO THEY COMPARE?

Comparatively speaking, when we did the virtual Spartan Trifecta weekend, they gave you the distance and exercises that needed to be completed.  However, the exercises were pretty easy in my opinion and you got to choose when to do them.  If you wanted to knock them all out first and then go do an uninterrupted trail run, you could.  I personally would just run a bit and then stop and do about five of the exercises at once… run some more, repeat until distance and exercises were complete.

Some others were purely just runs (even the Stadium Blitz OCR virtual), and some were a mix of just running and then separate challenges to knock off a list (like the Tough Mudder). The Savage Anywhere was laid out in a manner like Bonefrog’s, but it allowed you to keep more of a steady heartbeat and was more like doing a series of WOD’s.  We just subbed these ones out in place of our normal training lifts honestly.

The Bonefrog Challenge Honor Series was just different and more difficult.  It’s basically already laid out, in a particular order for completion.  For us, we went to a track and taped the challenge to a nearby wall that was easy to see quickly.  We set up any equipment in a shady area that we were going to need which was pretty minimal.  We used set of dumbbells that we determined would work for all of the weighted exercises.  This meant the dumbbells would be heavy for some things and light for others in order to make it work for everything.

The exercises were quite honestly exhausting.  Throw running into the mix and holy moly you get tired quick.  I even had a woman tell me I was inspiring as I was already gassed during the 4th to-do item on the list (out of 20).

This particular challenge was 10 items plus a “Hero Section” that slowly (not so slowly) upped the intensity and reps of the exercises while also dropping the amount of running.  So, after you got eased into the already difficult exercises and exhausted yourself running, you are thrown into a lot more extremely exhausting exercises.

But you know what? This challenge was such a great way to push ourselves!

YOU CAN PARTICIPATE THE FOLLOWING WAYS:

If you aren’t quite ready to travel or race an in-person event yet, you should definitely put this on your to-do list and give it a try.  Pick the version you want to do, pick a day, and go for it.  You might just surprise yourself in how well you do!  You can find the Bonefrog Honor Challenges and register for any of the versions here.

If you are ready to toe the start line again, they’ve got plenty of live, in-person races coming up –especially in the Northeast/New England area!  You can register on their website here.

We’re forming plans to be at the December event in Dallas, TX.  It’s the closest one to us and after getting a taste of their virtual races, we’re super excited to try our first one in-person.

Let us know if you’ll be there so we can say hello!  In the meantime, if you need help training for Bonefrog or any other obstacle course race, we offer custom running plans and complete strength training programs for OCR that take into account the skills, muscles, speed, and strength needed to crush the course.

(Editor’s note: information regarding Mike Monsoor and Collin Thomas was provided in the Bonefrog challenge itself.  Comments regarding Christopher Kyle derived from my personal knowledge/opinion.  If something is inaccurate, please let me know and I will make corrections upon review of verified citations.)