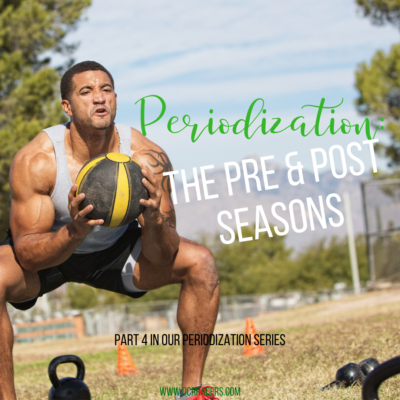 This is part 4 in a six-part series on periodization.

I previously discussed the overall concept of periodization, programming vs workout of the days (as it relates to training), and In/Off Season training programs.  Today, we’re hashing out the pre-season and post-season programs: what are they meant to do? What goals can be achieved? What kind of gains should be expected?

IS A POST-SEASON PROGRAM NECESSARY?

The initial stages of a post-season program are meant to help your body safely taper from the strain of competition, while taking advantage of the body’s heightened state of readiness in sport-specific adaptations (that are necessary and possible) to enhance progress while decreasing strain on the body.

Let’s say that a Post-Season program is like a cool-down for the OCR Season.  The cool down is a more subtle, but no less important, pathway to the well-rounded performance of you– the high caliber athlete. I know that abruptly shutting the engine down does not ever seem to be an immediate detriment; however, it obviously affects the turnover rate of training, recovery, and subsequently, your long-term performance.

WHAT ARE THE BENEFITS?

The biggest benefit of the post-season/cool down is blood flow. Assuming training is relatively intense, muscle fibers are torn and burning the body’s fuel creates byproduct, not all of which is performance enhancing.  For example, lactic acid builds up in the muscular system leading to soreness along with what every athlete has experienced at some point: an undeniable urge to not move at all. Physically you hurt, and it mentally changes your drive to improve via continued training. If not now, it eventually will.

A post-season program should be shorter than the other programs and concentrate on the most important skills you need to continue to train.  Meanwhile, the body is gradually being convinced to begin resting from the strain of an entire OCR season. This rest is paramount and prioritized over the preparation of the off-season program that is to come. Know that the off-season is utilized for improving performance goals via strength, power, and flexibility gains.

So the post-season is spent preparing the body for the stresses of lifting. Additionally, other repetitive dynamic and static stability movements are used so that you don’t leave the body overly fatigued. When it’s all said and done, and you finish a proper post-season training program, you should feel recharged.  You should feel motivated and ready to make those “off-season gains” in the upcoming off-season program.

OKAY…SO WHAT ABOUT THE PRE-SEASON?

Look at pre-season programs as kind of a warm-up into your OCR season. On a standard scale the warmup is used to increase heart rate, body temperature, and by doing so also blood flow. Warming up can directly improve functions across all ranges of athletic performance. Blood is literally liquid gold to your body. An athlete’s blood flow is that much more valuable. It carries oxygen, which is the key to unlocking our body’s function and full potential. Without a warmup, the potential for injury and underperforming increase.

Just as important as it is to warm up and cool down after every workout, it’s equally important to incorporate pre-season and post-season programming.  These programs essentially connect the dots to complete the full circuit of training.

Though the in-season program is the main body of your workout, the pre-season is the warmup and post-season is the cool down. In relation to the off-season, the roles are reversed.

With this understanding, it is obvious that these programs should be organized wisely to optimize your performance when it matters most!  When done correctly, the pre-season and post-season function as both warmup AND cool down.

Prior articles in this series:

Part 1 – Periodization: What is it, And Why Does it Matter?

Palmer Shape holds a B.S. in Physiology and is a Certified Strength and Conditioning Specialist designation (CSCS). Palmer Shape is equipped with over a decade of competition experience, having coached and trained hundreds of high school, college, and professional athletes, including obstacle course racers. A hurdler by nature, he is no stranger to overcoming obstacles quickly and efficiently.  His passion, combined with scientific knowledge and data, have helped hundreds of athletes take their training to the next level, often reaching podium spots or winning coveted titles. You can follow him on Instagram at @Palmer_Shape