Defining OCR Seasons: Why It Matters 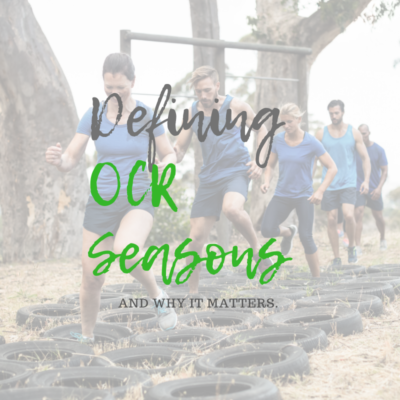 There’s an obstacle course race nearly every single weekend somewhere in the world.  It’s true.  With obstacle course racing growing as a legitimate and recognized sport, races seem to be never-ending.  They have become something more than just “Hey, let’s do that Tough Mudder coming to town next month!” It is now a full-on lifestyle (or profession) for some.  Considering that there are now professional obstacle course racers and other competitive categories (i.e.: Spartan’s Age Groups), people are upping their training in general.  It got us thinking: do OCR seasons exist?

Constantly available races + professionals and amateurs + heavy training sessions is a recipe for early burnout if one thing isn’t defined for the sport: the actual seasons of OCR.  Literally every other sport has a season, and OCR should be no different.  But, with so many competing companies offering races nearly anywhere around the world on any given weekend, it’s a difficult timeframe to pin down.

WHY DOES IT MATTER?

Here at OCRRacers.com, we’ve taken it upon ourselves to help begin the conversation around defining the OCR seasons.  Why? It’s not possible (or even smart) for a highly competitive athlete to be able to peak 12 months of the year, year after year.  There’s a reason that seasons exist for every other professional and recognized sport. Athletes need to train, and there has to be an end-point for a period of time where they can ramp down and let their body heal and recover.

Most of the larger OCR brands tend to have their Championship races in early to mid-Fall (well, it’s Fall here in the US, anyway):

There are more, including the regional championship races of course, but these are currently the main world championship races.  Most of the professional OCR athletes, along with the others that aim to compete at high levels (Spartan Age Groups, Non-Pro Elite racers, etc.), will want to be peaking at these types of high-level races and planning their training to match up to their schedule because a championship race is extremely likely to be on their A-Race list.  If you aren’t sure what an A-Race is exactly, we’ve got an article about that here.

With this in mind, we propose the following “seasons” in order to align with training: the pre-season, in-season, championship season, post-season, and off-season.

HOW IS EACH SEASON IMPORTANT FOR TRAINING?

We certainly don’t advocate to stop training.  Rather, we’d suggest being strategic about it.  Think ahead.  Typically, you don’t just do random workouts of the day, follow what you’re seeing on social media, and win races.  If you do, you’re really gifted. Congrats.  For most people, an actual training plan is going to be the most beneficial to reach goals.  As OCRRacers.com Co-Founder Eddie often says: “People don’t plan to fail, they fail to plan.”

In the Pre-Season, your training should consist of beginning to ramp up difficulty and intensity for all phases: cardio, flexibility, and strength.  You want to begin improving on both strengths and weaknesses, and getting into prime racing shape.

In the In-Season, your focus is on getting stronger, faster, better, etc.  You’re showing up to the gym crushing your workouts, pushing your pace, pushing your weights, and you are all in.  This is the glamorous part of training everyone wants to do all year long. (But shouldn’t!).

In the Championship Season, the building blocks of your training should be complete and training should be ramping down. You still want to maintain (still training hard but not trying to go up in weights quite so much.  Smaller gains at one time).  You should be peaking and all efforts are focused on that last meaningful race of your season.

In the Post-Season, you’re still training but in a thoughtful, strategic, and calculated way.  Post-Season  training should work to prevent injury, maintain gains, and include more rehab-style movements. It’s necessary to give some love to your muscles from the stress and maximum effort they’ve undergone. This will better prepare you to start back up the following year. The post-season training is not as glamorous, but it’s super important to your body’s longevity and success the next in-season.

In the Off-Season, you want to strategically focus on making gains.  Re-evaluate your past seasons. Determine what weaknesses and strengths you need to improve upon. Implement the proper program to make gains that align with the improvements you need to make. 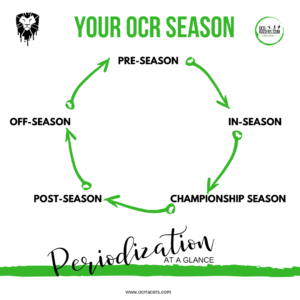 NATURALLY, THERE WILL BE LENIENCY IN OCR SEASONS:

It’s ultimately going to be up to each racer to determine when their actual “seasons” occur, and to plan their training accordingly.  Maybe your goal for the year isn’t a championship race, but you really want to focus your training and efforts on your first Ultra that’s in May.  You’ll obviously have to plan ahead and adjust your seasons and training so you’re peaking in May rather than October. While we think some sort of season needs to be defined, it’s still an evolving, fluid concept.  Maybe once OCR makes it into the Olympics, big brands may start defining OCR seasons and aligning their races to match.

For us, we’re personally going to experiment this coming year with actually having our off-season in the summer. It’s difficult to get up at 3am and run in the dark for a couple of hours in order to avoid the harsh, soul-burning sun in Phoenix.  I’ve actually scared a coyote, owl, and lots of birds when I come running up the trail at 4am.  The animals be like…. wtf it’s still dark lady, and I was sleeping until your headlamp blinded me.  Plus, did I mention I really hate waking up that early?

Even though racers ultimately need to determine their own A races and then their seasons for the year, we think it’s helpful to at least start defining what appear to be the most common months for the OCR seasons to occur, generally speaking.

We aim to provide training that will match the above goals for the seasons as defined.  Our In-Season training programs push you past the limits you thought you had.  Our Post-Season is going to give you all of that love your muscles are craving.  The Post-Season program has been thoughtfully planned out by Palmer Shape to help you maintain everything you’ve worked so hard for all year long, but provide training that minimizes impact, rehabs your body, and help you enforce good habits that will carry over into your next training block.

And please, let us know when you think OCR seasons should occur.  We look forward to hearing more on this from the community!

1 thought on “Defining OCR Seasons: Why It Matters”